With the success of last weeks flight on our other pond still fresh in our minds tonight finds us in the reed beds again. Another early season sold flight that has contributed greatly to welcome and much needed funds in the Club coffers via our recent and successful online Auction.

This time a team of three guns and a lady picker up had travelled south from deepest darkest Shropshire to sample the delights of duck flighting in Somerset. Following the customary introductions and safety briefs we took the short walk from our parking spot to the pond. As we arrived a cloud of duck, mostly if not all Mallard, erupted from the pond. Converging into one pack they gained height followed the railway line and disappeared from sight. We all stopped to watch them away and wondered as much as hoped that they would perhaps return at dusk.

Ten more paces and the same happened again. This time Teal. Perhaps thirty or more. Though these left the area to every direction in the small packs they’d lifted in, not taking the time or effort to bunch together as one.

Guns settled into their hides as pickers up concealed them selves in convenient vegetation well back from the waters edge. Several packs of duck, all Mallard began to skirt the area without really offering a shot. Then odd single birds appeared, low and direct with some splashing down on the pond unsaluted. Next a pack of five came high and wide but ventured close enough to the end gun for him to chance his luck and we were off the mark! The drake spiralled down sixty yards to my right and not quite dead. I put a dog on it straight away rather than risk losing it. Two minutes later the little bitch was back and we had our first duck of the night to hand.

Following the opening shots the sky was suddenly full of duck. Most were high but shoot able with many staying just that little bit wide. Others circled before disappearing in the direction of Nailsea. Non the less there was some decent shooting and slowly we began to build a bag. 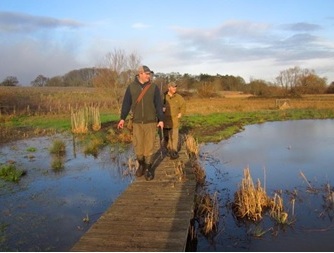 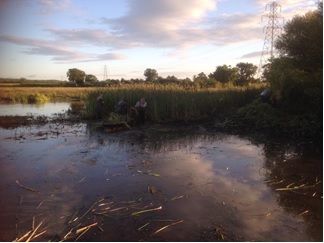 As the light failed in the western sky there was a little lull in proceedings. Where we’d had fifteen minutes of constant ducks in the air, as darkness approached all was still. Not even a blackbird called in the sedges and even the corvids were noticeable by their absence. Other creatures were abroad though as a badger came blundering through the undergrowth momentarily terrifying the lady picker up and very nearly bumping into me and my dogs!
As the day was almost done, once again the duck arrived in numbers. Teal could be heard whistling in all directions but not seen as they came low and fast. As always Mallard were more accommodating. Coming high and silhouetted against the thickening evening cloud before dropping noisily towards the water. Guns rang out but the shooting was much more difficult now and cartridge to kill ratios began to rise. With duck still coming in the whistle sounded to bring the evening to an end.

We all met at the waters edge to quickly discuss the nights events and commence the picking up. Several birds were on and around the pond and dogs could be heard splashing in the shallows and being encouraged across to the island whilst others combed the surrounding rushes.

Back at the vehicles with everybody accounted for and safe a quick count up revealed 17 in the bag. All Mallard but as always claims of last light teal on the lips of the guns. There were theory’s there may be one or two more but in the main most felt all birds down were accounted for. Even so plans were laid for a daylight sweep the following morning just to be sure.

As with last weeks flight the guns were ecstatic. They’d seen a lot of duck, fired a few shots and all had duck to take back up the M5. What more could they ask for?